Playing For Keeps
(The Morgan Brothers #2)
by
Savanna Grey

In the game of love… Fun-loving and always the life of the party, Kevin Morgan isn’t looking for a serious relationship. His light-hearted, playful attitude attracts many a female, and he enjoys their company. That is until their beautiful eyes turn starry, and they start talking marriage and kids. He just hasn’t encountered that one person that would make him even consider heading down the road to potential matrimony until... Katy Martin comes to town for an extended stay with his best friend and sister-in-law, Tori. Like Kevin, Katy is focused on her career and isn’t searching for a long term relationship. Already friends, Katy and Kevin find themselves spending more and more time together. Their adventurous spirits prove to be more than compatible. They are combustible. More than a snowstorm is brewing as attraction draws them together and desire starts a fire of burning need. Will trust issues and her belief that Kevin is just out to win the game of conquest hold Katy back, or will Kevin be able to prove to her that he is playing for keeps this time? *NOTE: Even though this is the second book in the series, it can be read as a stand alone novel * 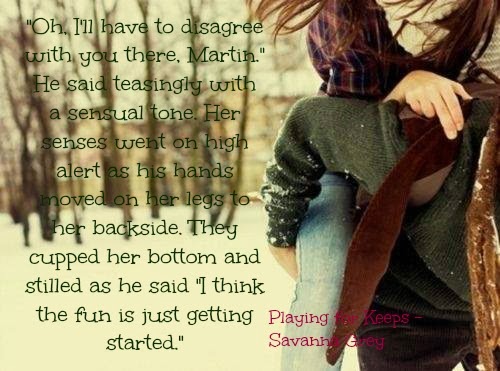 “Is there anything you don’t get involved in, farm boy?” Katy’s hand came up to caress Kevin’s cheek. “I would love to go with you. And just for the record, you’re a pretty amazing guy.” Kevin’s arm came around her waist and pulled her to him. “For the record, you ain’t seen nothin’ yet.” Before she could process his comment, his lips were on hers. It started out as a gentle assault but quickly became a full on tactical invasion, his tongue melding with hers. Somehow she had become pressed against the front door with his body pressed into hers. His warmth was intoxicating as his hands moved down her body and cupped her delectable derriere.

Wife and mother of three daughters and one son, life is never dull. I fell in love with the written word as a young girl. My enchantment with the act of falling in love was cemented after reading Pride and Prejudice in the 10th grade. I love being able to crawl inside a book as if I am a bystander watching it all unfold live. Now that’s a good book! My desire is to share my fictional friends with you so that they become your friends too! When you read my books, if you don’t end it by saying “Best Imaginary Friends EVER!” then I haven’t done what I set out to do.

Posted by The Whispering Pages Book Blog at 10:40 AM