Reject Me
(Kin Series #5)
by
Jennifer Foor
~ Synopsis ~
Peyton Hutchinson and Jamey Billings were an unlikely couple from the start.  Hiding their relationship from certain family members had become a habit, but wasn't necessary any longer. They'd been together for a while, half of it in secret, but she's ready to get serious and take things to the next level.  Almost forcing the issue, she decides to go live with Jamey and his mother.  Living with someone else's parent isn't what it's cracked up to be and soon tempers flare.  During all of the drama, Jamey thinks that clearing his head with other women is just the thing he needs.  While Peyton is at home waiting for him, he's out in the same parking lot he took her to, cheating  Then Peyton finds out what Jamey has done.  She turns to her brother, the known cheater for advice and does as he suggests.  She rejects Jamey, ending the relationship and making it clear that she never wants to see him again.  A broken hearted Jamey finally realizes what he's lost and decides that he won't give up until he gets Peyton back.  Will she forgive him or find someone else that will appreciate her?  Find out what happens next in the 5th Kin Series novel, Reject Me.

Parker Hutchinson has done a good job messing up his reputation as the golden child.  He's made bad choices, pushed everyone away and almost ruined his brothers life.  Though he's tried to make amends, he can't seem to find a way to convince his family he's changed.

Cameron Hudson is about to graduate college.  She's got her life planned out and knows exactly what to do to make it happen.  She's dated Parker since their Freshman year and hopes to one day be his wife.

Then she finds out she's pregnant.

Feeling like it is a great way to redeem himself, he proposes. Cameron accepts, unaware of his reasoning.  As the first trimester progresses she's still not sure she wants to keep the baby, but Parker keeps insisting they can do it together.  He seems so excited, so different all of a sudden.  She has no clue about what he's been keeping from her their whole relationship.  He's never told her about that one night with Ashley and what became of it.

When Callie accidentally overhears what Parker has been hiding, it changes everything for her.  She realizes that she's got a big decision to make and one question that she desperately needs answered.

Does Parker really want to be a father and husband or is this all some play to get back in the good graces of his parents?

Please note: Synopses and Release Dates are subject to change.

~ About the Author ~
Jennifer Foor is a YA and Contemporary Romance Author. She is married with two children and spends most days running around like a chicken with her head cut off. She enjoys reading (especially Indie Authors)watching shows from her DVR, and writing. 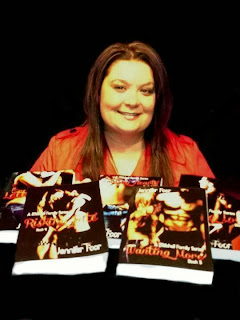 
Posted by The Whispering Pages Book Blog at 8:38 AM