“In its purest form love is self-sacrificing, eternal, selfless, enduring, truthful, forgiving and indulgent. It also feels an awful lot like a kick to the stomach when you try to fight it!”

All Everleigh Carsen wanted to do was complete her final semester at Hensley University and begin the life she carefully planned.

When a wave of violent crime seizes campus, Everleigh is persuaded to attend a school sponsored self-defense seminar by her best friend, where she meets volunteer instructor, Hunter Charles. After Everleigh’s biting sarcasm induces Hunter to eject her from class, a tempestuous relationship is born.

Everleigh is determined to forget the striking man, but fate—that fickle shrew—continuously intervenes. Unable to escape him, she declares Hunter an enemy combatant. The only complication…Hunter is resolutely pursuing vindication…by any means necessary. Verbal warfare ensues, and despite Everleigh’s ingenious efforts, in Hunter, she has finally found her equal.

Only For You is a compelling tale of friendship, desire, and redemption—brimming with intelligent characters, witty dialogue, unexpected twists, profound sorrow, unfettered hope, and love’s unassailable perseverance.

I glanced at the clock again—6:40 in the morning and I was awake.  I struggled to contain my frustration with Sam and reminded myself that she was my best friend, regardless of the inconvenient enrollment she made on my behalf.

Samantha Elizabeth Magdalena Whitney, Sam, grew up in a mansion on the North Shore of Long Island surrounded by every amenity.  She wanted for nothing, other than her parent’s attention and understanding.  It was the same old story—her father was absent physically and emotionally, and her mother tried to micromanage her life.  Sam emerged unscathed, no longer expecting her father’s regard, and disregarding her mother’s propaganda to follow her own path.  Sam lived life joyously, without pretention.
My mother was a ‘domestic’ at the Whitney estate, an ostentatious title synonymous with housekeeper.  It was a good position for a single mother, permitting her to work while I was at school and only requiring the occasional babysitter when the Whitneys hosted a special event.  The salary was conservative, but she was provided with a car and her compensation included health insurance for us both.
We only lived fifteen minutes apart, but we were in a different stratosphere.  Mom and I shared a small two-bedroom apartment in an older complex.  I wasn’t outfitted in designer labels, but I never had to hang my head in shame, either.  My mom strived to provide all of my needs and as many of my wants as was manageable.  She understood the importance of appearances to a young girl’s self-esteem, and creatively protected me from peer scrutiny.  We couldn’t afford store bought costumes, so each year she sewed my Halloween costume from old clothing she found at garage sales until I had a couture masterpiece—I always had the winning costume at the school parade.  As I grew older, she would find incredible vintage pieces at thrift stores, which my girlfriends coveted.  I can now appreciate the hours she must have invested into finding each discounted treasure, motivated by her love for me.  She even squirreled money away, a sacrifice I only later understood, to enable me to receive haircuts at a trendy salon.  She loved me fiercely and proved it not only in words, but also in actions.  It was only in recent years I could fully appreciate how blessed I was—what I lacked in trivial possessions was inconsequential compared to the vastness of her love and devotion.
Sam and I met shortly after Mom was hired by the Whitneys.  The school called the Whitney estate to advise Sam was sick but her mom was unavailable, in the city shopping, leaving my Mom to collect Sam from school and care for her.  Since the day was nearly over Mom brought me along, unable to arrange a sitter on such short notice.  I spent the afternoon keeping Sam company and we had been best friends ever since.
Sam demanded I join her dance class— according to Mrs. Whitney it was imperative that Sam study dance—and with no alternative to coax her participation, the Whitneys paid my tuition to accompany Sam.  It was Mom who taxied us, watched our rehearsal, and brought us home.  In fourth grade, Sam acquiesced to study piano if I joined her.  Unbeknownst to me, piano was another critical life skill that Sam must acquire, which meant I would acquire it as well.  In eighth grade, Sam refused to attend a prestigious enrichment summer camp unless I enrolled.  It was understood that if the Whitneys wanted Sam to endure any supercilious activity, it best include me to gain her cooperation.
Sam’s choice to attend the same university as me was the natural progression.  She could have attended any college in the world with her intellect, grades, and familial resources.  We applied to the same top ten ranked universities.  Sam’s dream was to move as far from her parent’s oppressive shadow as her admittance letters could provide, to discover life liberated from her family’s dogmata.  My acceptance would be determined by the university offering the greatest financial aid, as I was unwilling to burden my mom or myself with student loans.  I was accepted to all schools I applied, and Hensley was the highest-ranking institution to provide a full scholarship.  Sam was accepted to all schools she applied, with the exception of Yale—a slight she would never forgive.  When Sam learned I committed to Hensley, she shocked me by following suit.  She wanted to share the college experience with me and, after fifteen years of friendship, virtually sisters, separating would be akin to losing a limb.


The Whitneys were appalled at the prospect of Sam living in student dormitories.  Consequently, they bought a two-bedroom condominium in the most prestigious complex near to the school.  It was small, as all the apartments near school were, but luxurious.  Ever generous, Sam insisted I room with her rent-free to eliminate on-campus housing expenses.  I never could have foreseen Sam’s decision would be my saving grace.

~ Review ~
I received an ARC in exchange for an honest review.
This was the debut novel from Genna Rulon and it was an enjoyable read with some twists and turns and relatable characters.  Being from Long Island, I enjoyed that fact that she chose to base the story on her home ground.  I found myself trying to figure out which locations she used in her story as the names were changed to protect the innocent.

Everleigh Carsen and Samantha Whitney are best friends who have been through just about everything together.  So it would make sense that they would go off to college together.  But when your college becomes the hunting ground of a sexual predator who can you trust?

While attending a self defense course, Everleigh has an altercation with the sexy instructor, Hunter Charles and she is asked to leave.  That sets a whole “game” in motion in which Everleigh has no intention of losing.

You could cut the sexual tension between Hunter and Everleigh with a knife but their quick-witted banter and playfulness is what kept me going.  She had declared him in the friend-zone but I was truly pulling for more.  I mean Hunter had it all, quick wit, good looks and a protective streak.  What's not to want.

The author made good use of the secondary characters without taking away from the story.  Sam and Robbie’s relationship seemed to be the fairytale but his lack of assertiveness put me on alert.  It appeared that maybe there was more to him than meets the eye. I would have liked to have learned more Lincoln seeing as how he was supposed to be one of Everleigh and Sam’s good friends.

When the campus nightmare hits close to home, Everleigh is pushed to the brink, both emotionally and physically.  She finds comfort in the only arms she wants but is it just temporary?

Just when I started to figure things out, there would be another twist and turn to keep me going.   I will admit it was a slow start for me but once I got further into the story I needed to see where it would go.   I think I questioned just about everyone’s motives in the story and was pleasantly surprised in the end.

I will be looking forward to the companion novel “Pieces of You” releasing December 2013 to see Sam’s story.

~ About the Author ~
Genna Rulon is an up and coming contemporary romance author.

During her 15 years in the corporate world, Genna, inspired by her love of reading, fantasized about penning her own stories. Encouraged by her favorite authors, many of whom are indie writers and self-published, she committed to pursuing her aspirations of writing her own novels.

Genna was raised in Long Island, New York, where she still resides, surrounded by the most amazing family and friends. Married to a wonderful man, who patiently tolerates her ramblings about whichever book she is currently working on, even feigning interest relatively convincingly! Genna is blessed with two little boys who do their best to thwart mommy's writing time with their hilarious antics and charming extrapolations. 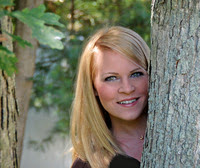 a Rafflecopter giveaway
Posted by The Whispering Pages Book Blog at 8:38 AM

Email ThisBlogThis!Share to TwitterShare to FacebookShare to Pinterest
Labels: Blog Tour and Giveaway, For You #1, Genna Rulon, Only For You, Review