Alayna Withers has only had one kind of relationship: the kind that makes her obsessive and stalker-crazy. Now that Hudson Pierce has let her into his heart, she’s determined to break down the remaining walls between them so they can build a foundation that’s based on more than just amazing sex. Except Hudson’s not the only one with secrets.

With their pasts pulling them into a web of unfounded mistrust, Alayna turns to the one person who knows Hudson the best—Celia, the woman he almost married. Hoping for insight from someone who understands all sides of the story, Alayna forms a bond with Celia that goes too far—revealing things about Hudson that could end their love for good.

This is the first relationship where Alayna hasn’t spiraled out of control. And she might lose Hudson anyway…

I was beyond excited to finally be able to read Found in You the second installment in the Fixed Series and I was not disappointed.  I loved spending time with Hudson and Alayna, so much that I read this book in one sitting.

Each page included you in their journey, through the doubt, conflict, insecurities and outside forces you always felt the love and connection between “H” and his “Precious”.

Found in You picks up where Fixed on You left us....Alayna outside of Hudson’s penthouse, second guessing whether or not she was ready for this. The place that no other woman has ever been invited.

While adjusting to the fact that she waking up in Hudson’s penthouse Alayna has a surprise visitor, one who apparently has her own key, Celia Werner.

I was not a fan of Celia in the first book and those feelings definitely followed me through to the next.  I was leery of Celia’s sudden interest in befriending Alayna and nominating herself the head cheerleader for Hudson and Alayna’s relationship.   She kept me uneasy throughout the story waiting for her to show her true colors.

I enjoyed Alayna’s enthusiasm to put her degree to use and create some more buzz for the Sky Launch.   She was looking for validation.  Validation that she did have good business sense and that she was capable of managing on her own.  But when her past blindsides her and threatens both her and Hudson will she be able to stand alone?

I think I fell more for Hudson as the story unfolded.  He was determined to stay on the path he had chosen and was willing to do anything to anyone for Alayna.  The moments when we learn the meaning behind some of his actions just made my heart skip a beat.

The revelation that they were more alike than different was enjoyable to watch unfold.  Yes, there were moments of doubt, moments of pain and moments of anger but the moments of love shined through the darkness.

We also got to delve a little further into the Pierce family secrets and dysfunction.  Let’s just say that there were a few twists and turns that I didn’t  see coming and was pleased with the outcome. I will definitely be picking up Forever With You in January 2014 to see how Alayna and Hudson’s story wraps up.   Will they get their happily ever after? 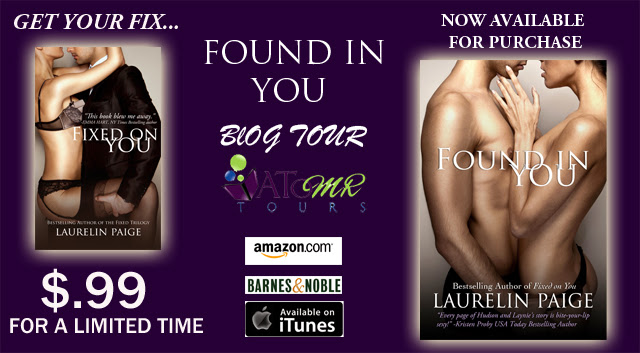 Laurelin Paige is a sucker for a good romance and gets giddy anytime there’s kissing, much to the embarrassment of her three daughters. Her husband doesn’t seem to complain, however. When she isn’t reading or writing sexy stories, she’s probably singing, watching Mad Men and the Walking Dead, or dreaming of Adam Levine. She is represented by Bob Diforio of D4EO Literary Agency.

Posted by The Whispering Pages Book Blog at 8:04 AM