Review
Fallen for You
(The Killer Next Door)
by
Carlie Sexton 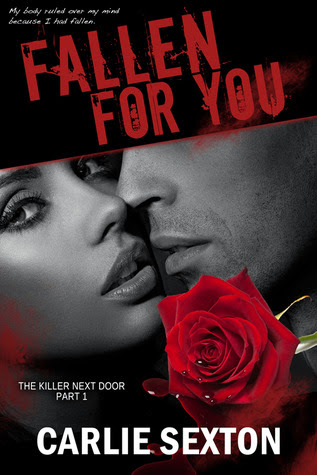 If you believe your life is the sum total of your choices, what do you do when things just don’t add up? You are about to find out. It won’t be pretty. It won’t be dull. And surely, it won’t be safe. In fact, making just one wrong choice could put evil at your bedside watching you sleep.

And so it is with Kate Simmons, a young woman who, by choosing to regain her life, actually puts it at risk by the very choices she makes. After unimaginable heartbreak stops her world on a dime, Kate falls into a three-year blackness of self blame that brings her to the edge of life, itself. As time finally brings light back through tiny cracks of renewed desire, Kate moves out of the prison she made for herself in her mother’s home to find a new reality, rooming with her best girlfriend, Charlie.

Yet, to be free is to be vulnerable, and Kate’s choices more than ever mark a splattered line between being happy and being dead.

Care to choose? Here’s your menu:
A strangely alluring building manager so possessed with wanting you for his own, he’ll bury more than the fact he has a girlfriend; a buff college student for whom you are clearly hot, as are all the other girls on campus; a pushy lawyer who is as handsome as he is intoxicated with conquest, who doesn’t take no for an answer, who gets what he wants — always.

Sometimes, it’s whom you choose. Sometimes, it’s who chooses you. If you’re Kate, it’s both, and it puts you on a perilous road where good looks and humor are the thin masks of jealous delusion and utter violence.

You’re in trouble when the sum total of your choices is written in blood red.

Debut novel from Carlie Sexton and it had me from page 1.  The story had it all,  love, obsession, pain and suspense.

Kate Simmons is a beautiful young college student trying to find herself.  After suffering a loss and closing herself off she is ready to start putting her life back together.  But that is where it all begins. Kate finds herself at the center of the attention of not 1 but 3 men.

Roger is the manager of the apartment building where Kate and her best friend Charlie have just moved in.  Roger is taken with Kate from the start and is determined to have her at any cost.  His tenacity and lengths that he was willing to go to just be near Kate were unnerving.
Mark is a fellow student of Kate.  He is easy on the eyes and makes some feelings start to stir in Kate.  However, the entourage of swooning girls following him around has Kate put off.  She is not looking to be just another notch in Mark’s bedpost.

Then there is Neil Statton.  Let the swooning begin.  Neil is super sexy attorney who is used to fighting for what he wants and getting it. Kate’s refusal go out with Neil has him even more determined to win her over.  He wants Kate and will pull out all of the stops to prove it.

Kate and Neil’s chemistry was off the charts!  I loved their attentiveness to one another and playfulness.  Neil was determined but never pushed Kate for more than she was ready to give.  Yes, their relationship evolved quickly but who is to say how long it takes for two people to fall in love.

So what’s a girl to do when unwanted advances do no cease and people start to go missing?  Who will win Kate’s affection?  Pick up Fallen For You and take the ride with Neil, Kate and Roger.  You won’t be disappointed.  Then see where their journey continues in Taken By You.
~ Rating ~

Carlie Sexton has had a passion for reading her entire life. She loves it so that she dedicated her life to educating children. As a teacher, she has had the profound pleasure of teaching children to read and explore their imaginations through a good book. Just recently she decided to write a story that had been on her mind. Now she has several that she wants to turn into additional books. Writing has become a passion that she dearly loves.

Carlie lives with her handsome husband in Southern California. They enjoy the relaxed lifestyle that California provides. They have two beautiful dogs, but no children.

Posted by The Whispering Pages Book Blog at 8:28 AM

Email ThisBlogThis!Share to TwitterShare to FacebookShare to Pinterest
Labels: Carlie Sexton, Fallen For You, Review, The Killer Next Door