Nerdy girl Autumn Blakewood is the prime example of a goodie two-shoes. She studies every night, is never late for class, and always follows the rules. She has never felt the need to step out of her comfort zone. That is, until she meets Hunter.

Hunter Bane is a cocky, confident bad-boy, who's nothing but trouble. He’s a dangerous distraction to everyone around him. Sexy and strong, Hunter enjoys the swooning effect he has on women. Especially those who aren't used to attention, like Autumn.

Autumn finds it hard not to give into Hunter’s advances, even though it all seems like a game to him. Trying to understand him is impossible, because he shrouds himself in mystery.
What she doesn't know is that Hunter has more baggage than anyone should have to carry. When she discovers he's in an illegal frat club to save the one person that matters to him, Autumn realizes this could mean the end of her undeniable connection to him. Even their lives are at risk.
But it's too late to turn back now ... 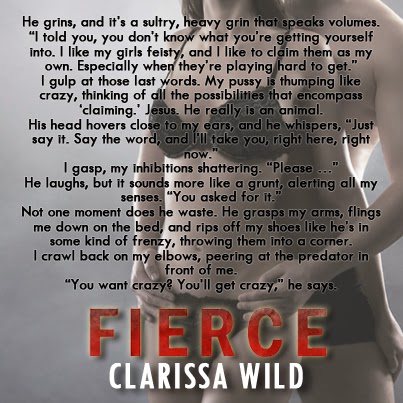 
I reach for the bottom of his shirt and scrunch it up. He raises his arms, letting me jerk it over his head. I still marvel at the sight of his beautiful body, those taut muscles and square pectorals. I love that it’s all mine. 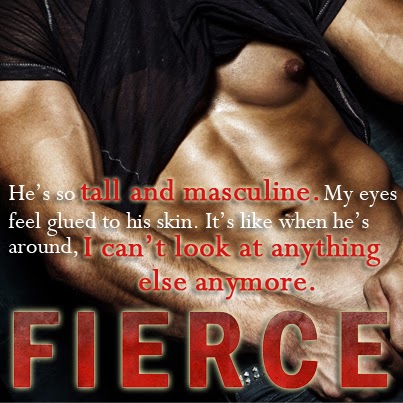 This is a list of songs special to Clarissa Wild, because they really brought life to FIERCE. You might enjoy listening to them. Especially the ones by Muse, which have their own special place in this book.

"Iris" by Goo Goo Dolls
"Skyscraper" by Demi Lovato
"Wonderwall" by Oasis
"The Reason" by Hoobastank
"The Fighter" by Gym Class Heroes ft. Ryan Tedder
"Uprising" by Muse
"Supermassive Black Hole" by Muse
"Radioactive" by Imagine Dragons
"Demons" by Imagine Dragons
"Holding on and letting go" by Ross Copperman
"Hold Me Now" by Red
"All I Ever Wanted" by John Tyree
"Wherever You Will Go" by The Calling

Want to get an email when my next book is released?
Sign up here to receive a FREE short story: http://eepurl.com/FdY71

a Rafflecopter giveaway
Posted by The Whispering Pages Book Blog at 9:07 AM